The Six Bardos and the Nature of Mind

The Bardo is a Tibetan Buddhist concept roughly translated as “thrown between.” Also called the Intermediate State, the Bardo arises between death and the next life.  It is said to be much like dream, sleep, and deep meditative states, when the edges of our reality blur, and forms, images, sounds, our sense of ourselves and duality diminish, yet presence remains.
The Bardo presents both a challenge to ordinary consciousness and an opening to the possibility of enlightenment.

Khenpo Nyima Dhondup Rinpoche will explore the Bardo with us. This weekend offers an opportunity to receive precious teachings from a high lama to help us prepare for this transition time.

Financial hardship alone should not prevent a practitioner from attending teachings.
Special payment plans are available.
Please contact us at info@ligminchatexas.org 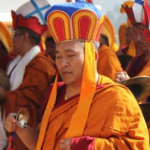 Rinpoche has been teaching Bön Sutra, Tantra and Dzogchen to Bön Dialectic students for more than 15 years and he has been an invited speaker at several major Bön and Buddhist conferences. He has also contributed several articles for Bon-sGo, the journal in Tibetan of Menri Monastery in India and the Himalayan Bön website in Tibet. Khenpo Nyima Dhondup Rinpoche has taken on the additional responsibilities of General Secretary of the Governing Council of Menri Monastery, and since 2011, Director of the official website of Menri Monastery (www.theyungdrungbon.com). In 2014, he visited Tibet and blessed many Bon followers and practitioners.