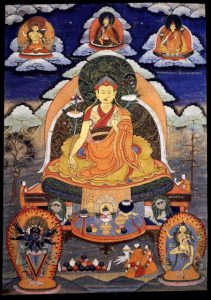 The nature of our own mind remains hidden behind clouds of thoughts and emotions until a master directly points out the source, the essence, the “heart drop.” This is the method of direct introduction to Dozgchen, the highest and most subtle path of medication in Bon.

The Heart Drops of Dharmakaya teachings were composed by Shardza Tashi Gyaltsen, a Tibetan master who upon his death in 1935, achieved the rainbow body, in which his physical body dissolved into light. Shardza Rinpoche was one of the most influential Bon Teachers of his time. His works are used as textbooks in may Tibetan monasteries.

In these teachings, practitioners learn a series of extraordinary practices that invoke direct perception of the nature of mind. Unlike methods that involve watching the breath or otherwise calming the thoughts, these practices rely on body postures, sounding of Tibetan syllables, and simple visualizations to draw one quickly to an experience of one’s essence.