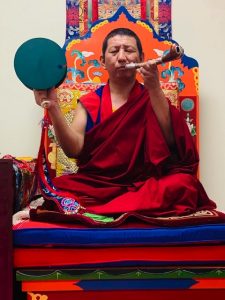 Laughter of the Sky Dakinis

During this COVID 19 world crisis, Geshe Denma invites you to join his daily zoom practice of Tibetan Bön Chöd every night at 8:30 pm CDT beginning on May 7, 2020.

Chöd is a traditional Tibetan way of removing emotional conflicts and dissatisfaction by compassionately disconnecting the fear and attachment that obscure your true nature of mind. Geshe Denma practices Bön Chöd to face fear and to cut through the root causes of suffering: the three poisons of aversion, attachment, and ignorance. Through practicing Chöd, your body engages internally with drum and bell, your speech engages energetically with beautiful singing and chanting, and your mind engages with visualization. The whole practice envelopes and evokes deep connections within the practitioner. Cutting through fear in whatever form, allows us to open and release into joyful creativity allowing the possibility to connect with the true nature of mind: Open, Awake, and Fearless.

All are welcome to join him nightly when you can.

An event every day that begins at 8:30 pm, repeating indefinitely